GOD gets it largely right, yet Vote Leave offers a ludicrous response

The former Cabinet Secretary Lord Gus O'Donnell (nicknamed GOD) told the BBC earlier today that negotiation of the new relationship between Britain and the EU cannot be achieved in the two year period set out in Article 50 of the consolidated treaties.

The EU has never concluded a trade agreement in less than five years, even though some of the deals made have nothing like the complexity of the deal Britain and the EU would need to make. But there's more to it. A huge and repeated mistake made by elements on the leave side is to claim we can achieve a deal inside two years, that we don't need to invoke Article 50 to commence withdrawal from the EU and to have a narrow focus on trade. Let's come back to that in a moment. Lord O'Donnell went on to say that:

This is where O'Donnell went wrong, with his comments about trade treaties with other countries. We are not under pressure to negotiate trade treaties with other countries, only make a deal with the EU to maintain single market membership to ensure British trade and economic interests are not damaged by Brexit. There is provision in international law for the continuation of treaties by parties who were not parties to the original agreements, i.e. those made by the EU on behalf of the UK.

This means the UK would not have to renegotiate trade deals and agreements which already include us. The continuance of the existing agreements in their current form needs only to be agreed by both parties and assent to this lodged with the United Nations, in line with the conventional practice in the Vienna Convention on the Law of Treaties. This was borne out by the separation of the Czech Republic and Slovakia into independent nation states.

O'Donnell also said that if the UK failed to get a deal within two years, the country would revert to World Trade Organisation rules, which would include significant tariffs. He's largely right, but the major problem here isn't tariffs, rather it's non tariff technical barriers to trade. It would be the fact the EU, as part of the EEA regional trading agreement (RTA) can discriminate against goods the UK exports to that market. The UK cannot discriminate back as the RTA's standards around regulatory convergence and assessment of conformity is accepted by the WTO. This can make exporting a longer, more costly process and would have an adverse financial impact on British firms. This is why membership of EFTA and the single market after Brexit (similar to the Norway position) de-risks Brexit, because Britain would be part of the RTA and there could be no discrimination.

Back to that huge and repeated mistake then. While making their pronouncements, Vote Leave has claimed we can achieve a comprehensive deal with the EU inside two years. It won't happen.

Vote Leave has ignored the fact that Britain and the EU would also need to negotiate an agreement that covers many other matters that are unrelated to trade, as part of the Brexit process. They have ignored corrections sent to them on this subject and they remain ignorant of Britain's future need to cooperate with the EU on inter-agency matters. Examples include things such as medicines, trademarks and aviation safety, air traffic control activity, European single sky agreement (which has Ryanair and EasyJet worried), maritime surveillance, customs, environment, and any number of other areas where the new post-Brexit relationship will require new agreements on coordination and cooperation to be established.

Vote Leave has also claimed that instead of invoking Article 50, we can just repeal the European Communities Act and leave the EU at will, breaching our agreed treaty obligations to an orderly withdrawal.

This is scorched earth territory, as such a disorderly Brexit would leave us outside the single market, leave us without a trade agreement, and leave us high and dry on regulation and conformity. It would be an act of grievous self harm. It is economic illiteracy and demonstrates the group has no grasp on the treaties or understanding of how international trade rules would affect Britain. What is most fascinating is that this was the language of Ukip a few years ago. Yet even Ukip finally accepted Britain's legal obligations under the treaties and after consulting lawyers agreed Article 50 is the only mechanism for withdrawing from the EU. Vote Leave is playing out a warped, self harming version of Groundhog Day.

What we have seen today is the product of ignorance and spin. It's a frightening thought that because Grassroots Out/Leave.EU is so incompetent, Vote Leave is likely to win designation to be the official leave campaign. The group has shown itself incapable of understanding the issues, immune to correction and unable to articulate a positive vision of what can be achieved.

The only leave group that is dealing with facts, evidence and reality and had the gumption to generate an EU exit plan that de-risks Brexit is The Leave Alliance. If anyone wants clarity about the issues and the solutions, click on the image below... 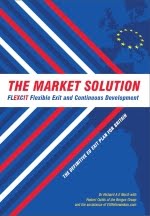