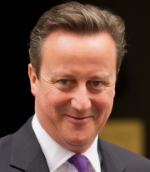 Back in February I wrote a piece titled, 'The five strikes against Cameron that see the referendum fail the legitimacy test' which I have reproduced below.

It is particularly apt today as Cameron has, with typical arrogance, now launched a taxpayer funded (without permission or consultation with taxpayers, of course) £9 million government propaganda website, accompanied by a 14-page pamphlet being delivered to every household in the UK.

This is yet another assault by Cameron on the Code of Good Practice on Referendums published by the Council of Europe (not an EU body), and at the Neill Committee on Standards in Public Life. See below for details.

Cameron's referendum already failed the reasonable legitimacy test. But today's actions compound the appalling contempt he has shown for the public, for fairness, for integrity and for adherence to internationally-developed standards for the neutral and impartial conduct of referendums. It is a disgrace.

David Cameron's actions are an abuse of power, an affront to democracy, and would shame a tinpot dictatorship.


So said David Cameron's spokeswoman to the media last September when the Electoral Commission recommended the referendum's question and answers be altered to removed a perceived bias to the pro-EU side. The government's approach seems to have changed more recently, by ignoring the Electoral Commission's advice on the timetable for the referendum.

Now is an ideal moment to revisit various recommendations on the timeline and conduct of referendums - brought to light by the formidable research of The Leave Alliance - to expose how Cameron not only lying about his non binding and entirely reversible 'dodgy deal' with the EU, but is also fighting dirty in an effort to win 'his' referendum at any cost, and keep Britain subordinate to the EU.

First, let's look at the timeline issue. To set the referendum date the Government must table an order in both Houses of Parliament, which is then debated and almost certainly approved. The Electoral Commission recommended that:


Once the date Order has been approved, the legislation requires that there are a minimum of 10 weeks between the Order setting the date of the referendum and polling day itself. The Commission continues to recommend that best practice for referendums is that all legislation (including the introduction of regulations to Parliament for approval) should be clear at least six months before it is required to be implemented or complied with, although this is not a legal requirement.

Cameron has chosen to ignore this so he can rush to a vote in less than four months. Rather than separate the designation of campaigns from the referendum period, it looks certain that such activity will take place during the referendum period, shortening the time that will be spent on actual campaigning, to give the Remain side an advantage.

Something else the government has chosen to ignore are the findings of both the independent Commission on the Conduct of Referendums, a joint endeavour of The Constitution Unit and the Electoral Reform Society, and the the Neill Committee on Standards in Public Life concerning the conduct of referendums.

The commission said that the responsibility for the publication and management of information relevant to a referendum should be exercised outside of Government - by an independent commission. It also recommended that the conventions which require the Civil Service to avoid engaging in political or public debate and which limited its actions to the provision of factual information, should be maintained.

The committee stated the obvious observation that it would be difficult, if not impossible, for the government to offer purely objective and factual information in the course of a referendum campaign, especially when it is a party to the campaign. Because of this the committee said it believed governments should not participate in referendum campaigns in this manner, just as it would be thought to be wholly inappropriate during a general election campaign for the government to print and distribute, at the taxpayers' expense, literature setting out government policy. The committee recommended therefore:

The government of the day in future referendums should, as a government, remain neutral and should not distribute at public expense literature, even purportedly 'factual' literature, setting out or otherwise promoting its case.

Cameron, by ignoring the Electoral Commission, an independent commission and the findings of Neill Committee, has shown he is determined to use the full machinery of government to fight a heavily slanted campaign to remain in the EU. His co-opting of the civil service to actively help that side of the referendum argument, and his instruction to deny ministers who want Brexit, access to any official documentation relating to EU matters while making it available to the pro-EU ministers, shows how dishonest and dishonourable he is.


"One purpose of a referendum is to secure legitimacy for decisions where Parliament alone can not secure that legitimacy. For that legitimacy to be secured, the losers have to feel that the fight was fairly conducted"

Dirty Dave Cameron's fight has been anything but fair: 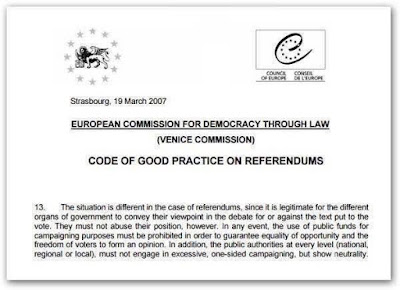 With those fives strikes against Cameron, his referendum already fails any reasonable legitimacy test, and we haven't even had the vote yet. Expect more of the same in the coming weeks and months. Because of this nothing will be considered settled. No matter what happens, the fight for Britain to be a democratic nation will continue after 23rd June.
Posted by Unknown at 9:31 pm