New home for the blog

We've moved beyond the campaign and the vote and as attention moves to executing a Brexit from the EU so it is the blog should move with it. Thanks for reading "Vote to Leave the EU" and I hope you will join me at my new home, "The Brexit Blog".

The United Kingdom has voted to leave the European Union.

We've done it. When we leave the EU we will at last create the conditions to develop real democracy in our nation. It will be a long and arduous task, but it must be done. The people have shown our political class is out of touch, so we need to take power back.

The first step on the long journey to independence will now need to be taken by the government. Brexit is not an event, it is a process. It will take time and careful handling to chart our route to full independence in a phased manner.

Having spent so long talking this country down to scare people into voting to remain, David Cameron now needs to talk up what this country can achieve. He also needs to scrap his rejection of single market participation and recognise it is the safest and most suitable layby to park in as Britain redevelops its competence in self governance and autonomy on the global stage.

The civil service now has a huge responsibility to stop David Cameron triggering Article 50 until after discussions with individual EU member states. We need to find areas of agreement that will enable us to remain in the single market after we have left the union. That will mean no negative economic consequences for us or the EU, but give the UK the ability to control migration with the emergency brake as part of the EEA agreement.

If Cameron presses ahead with the Article 50 notification without a pause for discussions, it would be nothing but a needless act of political retribution on the electorate, a Prime Minister actively trying to damage the country he leads.

More later about what needs to happen next. For now, I just want to take some time to let this seismic moment, something I have tried to help bring about for years, sink in.
Posted by Unknown at 5:24 am

Please use your vote to LEAVE the European Union

The day has arrived and the polling stations are open. The British people have a black and white choice between:

The first option is by far the most democratic, positive, constructive and beneficial for the people of this nation. This extraordinary piece, "For democracy and freedom - vote leave" by Professor John Fitzpatrick, Director of Kent Law Clinic, explains the democratic need to withdraw from the EU. As Fitzpatrick says:


Settling for a good king rather than a bad parliament should, now we have been asked, be turned down.

We can change the parliament, but we cannot remove the king if he rules badly or unjustly. We can have a more democratic Britain, but it can only begin to become a reality if your ballot paper looks like this before you put it in the ballot box today. 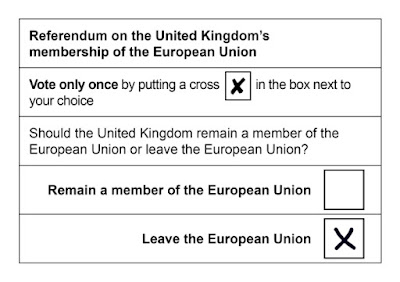 Seize this moment with hope and confidence. Begin the work of making Britain a more democratic nation, by starting the process of taking back power for the people...


VOTE TO LEAVE THE EUROPEAN UNION
Posted by Unknown at 8:17 am 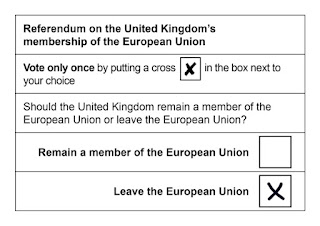 After many years of campaigning, inside and outside party politics, for the UK to regain its independence, the moment I've long fought for is here. A referendum, where the voters can decide who should run Britain.

The choice is clear.

This is the choice before us all. This vital referendum is not about specific outcomes, such as the economy, or trade, or the NHS or even security. It is about us determining who decides those outcomes - people elected by and accountable to us, or people overseas who are not.

Please set aside the raft of claims and counter claims of the politicians who have hijacked the referendum campaign to service their own political ambitions and vanity. This is your referendum, not theirs. It is being held precisely because the matter before us is too great, too important, to leave to the politicians, so why should we play their game?


deciding who governs the British people, and how.

This might be the last time your vote decides who governs us. It is a crucial and pivotal moment. We have the opportunity to undo the wrong inflicted on the British people in 1975, when voters were lied to about the EEC's true aims and the impacts on this country's sovereignty. We have since seen for what they were, the lies of those who wanted us to be subsumed into a European political superstate. The current false claims of exemptions, that have not been agreed by the EU and which can be rejected by the EU after this referendum, are a replay of 1975. Those who forget history are condemned to repeat the mistakes of the past.

Don't make the same mistake our parents and grandparents made in 1975. We have the luxury of seeing the self declared aims of the European project. We understand that means the dismantling of the United Kingdom and the other member states as sovereign nations, with power placed into the hands of people we cannot hold to account or remove. Vote to take back our independence from those determined to remove it forever. The time has come. Your moment is now. Put democracy first.

VOTE TO LEAVE THE EU

A day of revulsion

The cold blooded murder of Jo Cox MP was as senseless as it was barbaric.

A woman in her prime has had her life snatched away by a maniac. A husband and two young children have had their family destroyed and their lives forever darkened by the actions of that man. My thoughts are with them as they try to come to terms with the huge loss they have suffered.

The murder investigation is ongoing, but there are some things we do know. We know that there is too much violence on our streets and too many people lose their lives at the hands of other people. We know that this murder will be given far more prominence than other equally terrible killings because of who Mrs Cox was. We know that initial reports of the circumstances of such heinous acts are often replaced later as facts become established and evidence is gathered, so jumping to conclusions isn't in anyone's interest.

Almost as sickening as the murder itself on Thursday, was witnessing the cynical, self serving self indulgence of some people who sought to make political capital out of Mrs Cox's death.

For people to use the murder as a weapon with which to bash a campaign they oppose (leave), claiming high profile people in that campaign have sought to make people feel rage and so cannot be surprised that this violent murder was the outcome, is disgusting and outrageous. Alex Massie and those cheap individuals who endorsed his now-removed article, are a disgrace.
Posted by Unknown at 8:30 am