Media hacks and prestigious talking heads are excitedly pontificating that this will be the year the referendum will be held. That may turn out to be the case, although there are very good reasons to believe we won't be going to the polls over EU membership until 2017.

One thing that will almost certainly happen this year is that a group will become the designated lead campaign group, thus having official status. At this time there are two recognised contenders working to become the 'leave' designated organisation, but another group is expected to enter the fray in the coming weeks.

Although not perfect and in need of some gravitas, the 'Leave.EU' group formed by Arron Banks, is genuinely committed to Britain leaving the EU completely and for good. Therefore they are allies in this fight.

The same cannot be said of the Matthew Elliott/Dominic Cummings money making venture, 'Vote Leave'. The group is populated at its highest levels by people professing to be 'eurosceptic' but who want Britain to remain in the EU as long as there are reforms. To understand the mindset of Vote Leave, just consider the words of its co-owner (it is a Ltd Company) CEO and founder, Matthew Elliott: 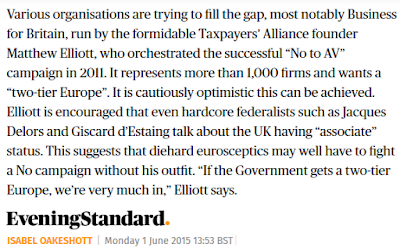 Associate Membership of the EU, also described as 'two-tier Europe' is what the EU and David Cameron are preparing for Britain. This mean Vote Leave's owner and CEO is, to all intents and purposes, aligned to the position of David Cameron and the 'remain' grouping. This is no surprise as the man is Cameronian part of the Westminster establishment furniture, about whom Isabel Oakeshott wrote in Conservative Home:

Elliott's position is undeniable. He actively supported and encouraged the concept of negotiated reforms resulting in Britain staying subject to EU control while leader of Business for Britain, and his position has not changed.

Newer readers may not have seen our previous posts that provide evidence of the duplicitous nature of Vote Leave, and its deceitful intention of winning a vote to leave at the referendum only so David Cameron can use it to secure more reforms while keeping Britain in the EU, so here are links to just three of them that underline the charges against Vote Leave:
Winning the referendum in order for Britain to leave the EU is going to be hard enough without having people who don't actually want us to leave the EU running the official designated lead campaign for the leave side. They have to be exposed for what they are and prevented from enriching themselves while undermining the Brexit cause. Everyone genuinely committed to Brexit needs to help stop Vote Leave.
Posted by Unknown at 12:08 pm