A little help for Fraser Nelson regarding Article 50

Fraser Nelson, the editor of the Spectator magazine, is having a bit of difficulty with comprehension. Granted, it's probably been a while since school and university, but even so one would expect him to understand the clear terms of Article 50, the treaty provision for member states to give notice that they are leaving the EU.

Fraser is labouring under the misapprehension that the UK notifying the EU of its intention to leave via Article 50 bars the UK from taking part in the exit negotiations. No, seriously. He calls in evidence paragraph 4 of the treaty article:

Note that he quotes:

The full text of paragraph 4 of Article 50 actually reads:

The reference to paragraphs 2 and 3 is crucial in making clear exactly what the withdrawing state is being excluded from:

Despite people telling him he's got the wrong end of the stick, he's dug himself in, declared that he has been accurate and reiterated that this demonstrates the restriction is illogical and vindictive. He also claims, quite bizarrely, that 'there will be other ways to leave the EU than Article 50'.

There are none so blind as those who will not see, but as a former political journalist of the year people should expect him to display at least a modicum of intellectual rigour in his work. So, for the record, here is my reply to his comment on the EU Referendum blog. Hopefully he reads it and finally recognises what a monumental error he has made: 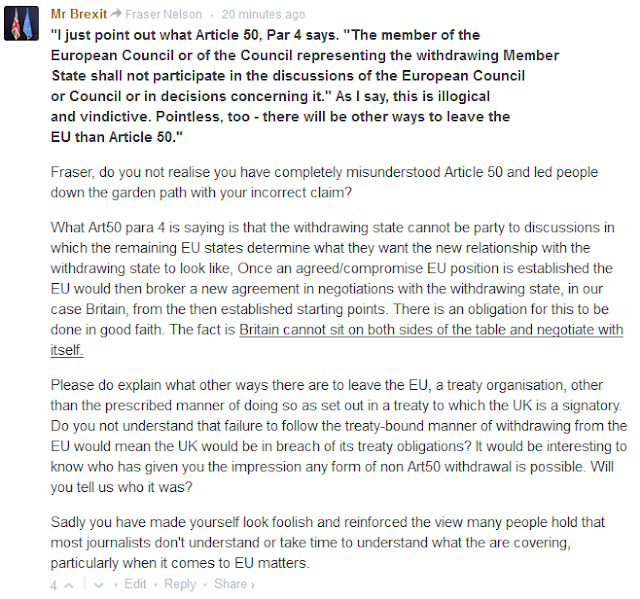