By way of a follow up to the post from earlier, below is another piece of evidence from 2015 that underlines senior Vote Leave figures want to stay in a reformed EU rather than leave it for good. 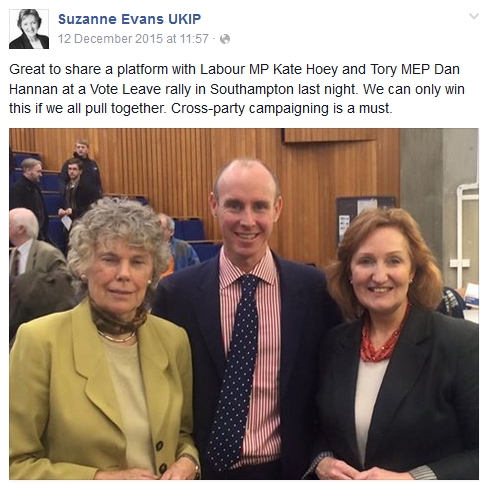 Being a senior Ukip figure most people would expect her to want an unequivocal British withdrawal from the EU. But before joining Vote Leave she revealed her viewpoint to be nothing of the sort, as this screenshot from the Telegraph from 23rd March shows:

Some may argue that Evans has qualified her comment by saying she doesn't think the reform will be achievable and therefore is campaigning to leave. But that would be to misread the situation.

Reform is not only achievable, it is actually coming in the shape of Associate/Affiliate Membership, which suits both the Eurozone countries and David Cameron. Vote Leave knows this. So when David Cameron presents that two-tier Europe reform as the solution to Britain's EU concerns, will Evans see her reform wishes being realised and join Matthew Elliott and Co in voting to remain in the EU? Decide for yourself.

It cannot be said enough, Vote Leave is not campaigning to leave the EU, only for a vote to leave. The Elliott/Cummings plan is that David Cameron can use referendum leave vote as a bargaining chip in his reform negotiations that delivers what Business for Britain always wanted, to keep Britain in a reformed EU.

People like Suzanne Evans who are part of Vote Leave are one of two things, they are either deceitful con artists with no intention of securing Brexit, or they are unprincipled hangers on reluctantly declaring for leave unless their reform ambitions are realised.

What they are not are people who want Britain to leave the EU, come what may, as a matter of democratic principle. They are not our allies.
Posted by Unknown at 2:30 pm