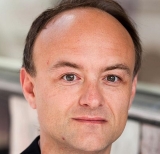 In the Spectator is an article by James Forsyth.

In it he reports that David Cameron is trying to frighten voters away from a leave vote (Project Fear) by promising to respect their wishes and invoke Article 50 to begin the process of withdrawing from the EU.

There was one particular section that attracted the attention of Vote Leave's campaign director, Dominic Cummings. He has taken it and twisted it to suit his own agenda. That passage is...


But Downing Street is confident that it can crush the idea of a two-vote referendum by saying that, if Britain votes out, Cameron will invoke Article 50 — the formal and irreversible two-year process by which a country leaves the EU. To re-inforce this point, other EU leaders will make it clear that a vote to leave will mean precisely that. (Though given how disastrous Brexit would be for the whole European project, and the EU’s habit of making countries vote again, these warnings will not be entirely credible.)

In response to this attack on his precious demand for a second referendum - which is designed to follow talks with the EU after any leave vote, which would aim to get a better deal than David Cameron sought, resulting in a new vote that results in people choosing to remain in the EU - Cummings tweeted:

The word 'immediately' does not appear in Forsyth's article. Anywhere. It is a cynical invention by Cummings, which enables him to peddle the falsehood that Article 50 would be triggered straight after a leave vote (which would spike Cumming's agenda of keeping Britain in the EU). Lying and distortion are trademarks of Cummings. Over the last two days he has maintained the fiction.

But Cummings has also added a new dimension to his deception, with the extraordinary claim that Article 50 itself is not the only legal route out of the EU.

Warming to this new piece of self delusion, Cummings has continued with his theme in this tweet...

Notice the sly use of language to talk about a 'new UK-EU deal' rather than Brexit. Leaving the EU is not what Cummings wants. Then there was this...

The fact is Article 50 is the only legal way to leave the EU. There wasn't a set method before because it was always assumed in Brussels that once in the EU no country would ever decide to leave. The manner of leaving the EU has been set out in the Treaty which therefore makes it the only legal method states can follow if they decide to withdraw from the EU. Failure to follow the Article 50 route would see Britain breach the Treaty and our legal obligations under it.

Cummings has also sought to maintain his lie about Article 50 being invoked 'immediately' in replies to other tweets, such as this one... 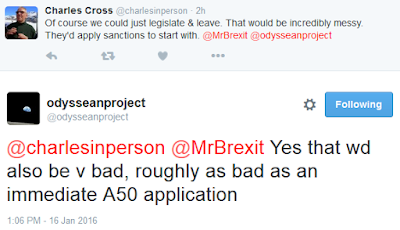 Needless to say, a number of people have asked Cummings to state what these other 'routes' out of the EU are. But as usual, when asked a question that would reveal his dishonesty, Cummings simply ignores it and keeps transmitting his falsehoods. If there are other legal and better ways to leave the EU, then surely Cummings would be quick to rush forth and set them out for all to see. His silence is deafening and all too typical.

The litany of deceit and distortion from this pathological serial liar continues to grow. From cynically letting Vote Leave supporters believe the group seeks Brexit, to pretending Article 50 would be invoked 'immediately' after a vote to leave, to telling people there are better, legal routes out of the EU than the treaty-bound Article 50, no one can believe a word Dominic Cummings says.
Posted by Unknown at 2:49 pm