Elliott and Cummings: Their masters' men, or the illusionists' assistants 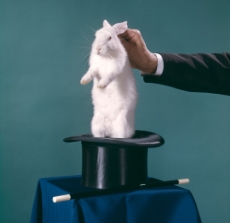 One question that has not been answered is why Dominic Cummings started making claims on Twitter and in the Economist about Article 50 not being the only legal route out of the EU, and what he is trying to achieve by it.

Failure of a country to uphold its treaty obligations can result in the other party/parties refusing to keep their obligations to that country. That can have serious repercussions, and also lead to bodies like the WTO withholding protection in trade disputes due to Britain's non performance of the contract it agreed. It can also result in other countries having no confidence in Britain honouring its obligations as we try to form future agreements.

It is illogical for the campaign director of an organisation (Vote Leave) that keeps talking about a better deal on things such as trade, to advance the rejection of legally binding mechanism, the effect of which would adversely impact trade. There has to be some rhyme or reason behind Cummings' eruption.

By combining information from several sources it is possible to see a bigger picture, one that shows us the co-owners of Vote Leave appear to be coordinating with close associates in the very Tory party leadership that is working to keep Britain in the EU.

That Vote Leave's CEO, Matthew Elliott, is an establishment insider and Downing Street favourite, was hand picked by David Cameron to run the No to AV campaign, and was so close to having a job in Cameron's Number 10 that he was even shown his future desk, is no secret. Nor is the fact Elliott reportedly made regular visits to Number 10 as he established Vote Leave, and has refused to withdraw his comment that if Cameron can agree an EU deal for a 'two tier Europe' associate membership of the EU that his organisation 'would be very much in'. Cameron is Elliott's master and that is where Elliott's steer comes from. Much has been written regarding Elliott's real motives and absence of a desire to leave the EU. But what of Cummings?

It has been more difficult to understand what Cummings' direction and motives are. He seemingly stands for nothing beyond the referendum vote itself, has refused to answer any question asking whether he supports Brexit no matter what, and seemingly out of the blue has recently launched an unexpected assault on the notion of following the prescribed Treaty on European Union Article 50 process of withdrawing from the EU, even going so far as to invent the idea that there is a plan to 'immediately' invoke Article 50 after a vote to leave.

But it wasn't out of the blue. It has all the hallmarks of coordination. By understanding who Cummings' closest associate in the Cabinet is, then bringing together a piece from the Sunday Times on 17 January with a piece from the Better Off Out website earlier this week, a startling alignment becomes clear and explains what is driving Cummings.

The Sunday Times piece, titled 'PM’s secret EU masterplan' reports that David Cameron has a secret plan to 'deliver three surprise "rabbits from the hat" in his renegotiation with Brussels' when EU leaders meet on 19 February. It sets out the three 'rabbits' and who is responsible for making them appear: 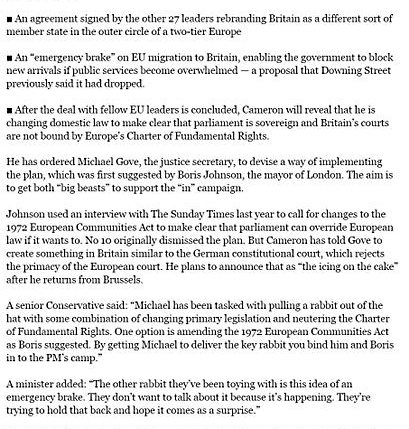 These rabbits from hats tally with the Vote Leave rhetoric of rolling back EU law and having a new deal with the EU (not the same thing as Brexit). Michael Gove's pivotal role in bolstering the reform and remain agenda is what stands out. Gove is supporting the renegotiation and now it seems he is actively supporting Cameron's stated aim of keeping Britain in the EU. Gove has turned pro-EU membership, as so many Tories will in order to put career and party before principle.

What of the Better Off Out article? Titled 'In or Out? Flip-flops and fudges in the EU referendum debate', it seeks to highlight the positions of some of the key members of the Cabinet. This is what Better Off Out has to say about Michael Gove:

The former Education Secretary, when asked in 2013 whether he would vote for Britain to leave the EU at that point, replied: “Yes, I’m not happy with our position.” Despite his reputation as a man of principle, however, Gove was as good as outed at the weekend by a report in The Sunday Times. FLOP


If a reputed man of principle can flip flop in such brazen fashion, it would not be a stretch of the imagination to see his biggest admirers follow him down the same path. What Gove has been reportedly charged with delivering concerns challenging and overriding EU law and, at the exact same time, it just so happens that Cummings has taken up the cudgel against Article 50, challenging existing EU law. What a stunning coincidence! This is high politics and even though the evidence is circumstantial, there is no coincidence here.

Cummings claimed there are other legal and political routes than Article 50. When challenged to set out what these are, he has remained silent. That silence makes sense if, as it now seems, Cummings has no idea yet what they are and is waiting for a steer from Gove about what the judicial rabbits will look like. By doing so, instead of looking towards Brexit and using the existing, legal and safe solution to take Britain out of the EU, Cummings and Vote Leave are shooting for alignment with the government's aim of the 'two tier Europe' hankered after by Matthew Elliott. In all likelihood, even the Vote Leave board may not have grasped exactly how the group is being manipulated to further Tory party ambitions, despite moves to remove Elliott and Cummings (£) from the campaign on Tuesday.

Elliott and Cummings are playing Debbie McGee to Cameron and Gove's Paul Daniels. They are the assistants to the illusionists, smiling and gesturing to the top hat in readiness for the big reveal.

It is bad enough that Vote Leave has failed to pursue a clear and unambiguous Brexit agenda thus far. Even a hint of evidence suggesting they are working in tandem with a government that is devoting all the machinery of the state to keeping Britain in the EU should be serious cause for concern.

On its own what has been outlined above does not constitute a smoking gun, but it could yet prove to be. It fits with what we've been reporting about Vote Leave and it certainly has a nasty smell about it. At the very least everyone now knows to look out for a Gove-Cummings nexus.
Posted by Unknown at 10:50 pm