I am full of admiration for Daniel Hannan. No, really.

Rarely have I seen such agility in someone's writing. Hannan is a master of contortion when it comes to the written word. There are few who could give the impression of supporting Brexit in their articles, when their conclusion promotes a reform deal that keeps Britain in the EU. But Hannan does this with incredible skill and consistency.

Hannan has done it again in the Spectator this week, leading people to think he is calling for Brexit with strapline of "Life outside the EU could be very good for us" (shown below) 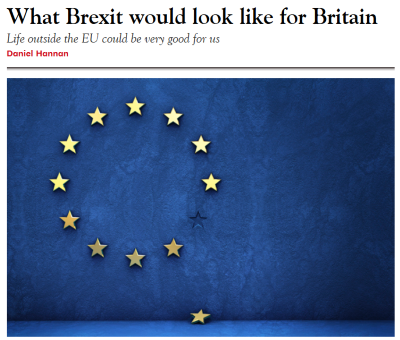 
Daniel Hannan and Vote Leave are continuing to take people for fools. Associate Membership is not some privileged position outside the EU. A two tier property is still a single building. Membership is membership. Britain would remain part of the EU second tier, remain bound by the ECJ, continue to receive and implement directives from Brussels.

The only difference is that the full members will take decisions and further integrate to service their place as Euro currency users. Associate Membership only exists as a concept to enable this deeper integration while keeping non Eurozone countries under Brussels' control. So what Hannan is doing is trying to position continued EU membership as something other than that. He's being completely disingenuous.

He is being a loyal director of Vote Leave (since 22 Dec 2015). That group has always wanted a reform deal, of the type they always demanded in their guise as Business for Britain. They never call for or endorse Brexit because they want to remain in a 'reformed' EU, and everything they do is geared to achieving that outcome. Even Dominic Cummings' notion of a second referendum only exists to reverse a vote to leave after further EU talks and some more crumbs from the table.

If you want genuine Brexit, Hannan and Vote Leave are not on your side.

If Vote Leave were honest about their proposition they would change their logo to this...