Challenging The Economist, its europhilia and dishonesty 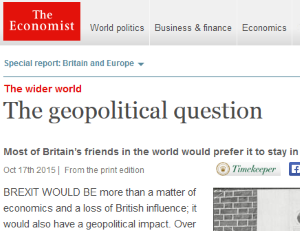 In the latest edition of the committed pro-EU magazine, The Economist, we find one of its 'special reports' on Britain and Europe.

It's noteworthy for the angle it has taken. It has attempted to steal some of the Leave side's thunder by shifting away from the usual Europhile approach of fearmongering about imagined economic consequences of Brexit, and talking about the real issue at the referendum... politics.

You can read it online. Most of the questionable arguments deployed by The Economist will be familiar to many readers here, but as many people are not as energised by the Brexit debate as us, there is still a requirement to counter with some simple messages. Therefore I left a comment under the piece last night, which is reproduced below in case it gets moderated out:

Right off the bat this article set out to assert that leaving the EU would mean Britain lost influence. It later set out to suggest some make believe common position that 'Eurosceptics' hold regarding the 'Anglosphere'.

Britain's EU membership prevents this country from representing itself or its own interests on the bodies where the rules and standards that become laws, are made. That isn't influence. That is being rendered silent and invisible and having to accept whatever deal the EU signs up to. On more than 70 occasions Britain has opposed proposals from the European Commission. Each time it has been over ruled, undermining British interests. So where is this mythical influence?

Some people who want to leave the EU have romantic notions of turning back towards the Commonwealth, some of forging a loose bloc of English speaking nations. The fact is most 'Leavers' want Britain to turn its face towards the whole world and seize opportunities not realised by the EU because of the interests of other member states. The ability to set our own terms of trade and to co-operate on an intergovernmental basis with any non-EU country would benefit business and restore our influence in the world.

The EU is a supranational entity rooted in a 1950s mindset that sets out to subvert democracy, and ill-serves the interests of modern, industrialised nations with large economies and a global outlook. We should vote to leave the EU.

Hopefully some of this might be useful to those of you who engage online on blogs, Twitter and Facebook. Please help challenge the dishonesty of our opponents and spread the word about what we stand for.

Let's take on and defeat those who want to cement Britain in the diminished position we find ourselves, where we're invisible in the corridors of power and voiceless in the rooms where decisions that affect British people and businesses are made.
Posted by Unknown at 7:00 am