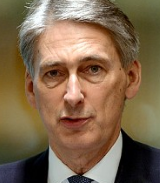 The Telegraph's Peter Dominiczak has published a piece in the last hour reporting that Foreign Secretary, Philip Hammond, has warned that British people will vote to leave the European Union unless Brussels gives "substantial and irreversible" reforms to the UK.

But Hammond is being slippery. This isn't the government telling the EU to give Cameron what he wants or else they will take Britain out of the EU, this is Hammond saying that the British people will vote to leave unless the EU gives concessions. He is playing 'watch the birdie' to distract people from the real story, which is the government using delaying tactics to string along the sham renegotiation as the concept of associate membership of the EU is finalised. The piece says that:


In a significant hardening of the Government’s language on the prospect of a British exit from the EU, Mr Hammond made clear that the UK Government is not bluffing when it tells leaders on the continent that a Britain could opt to leave.

It isn't a hardening of the government's language at all. It is a cynical continuation of Hammond's bluster about the 'stalled' renegotiation where EU leaders have bemoaned the British government not committing a single demand to paper because, incredibly, it has no hard and fast demands about what it wants from the EU! Small wonder really, because Cameron is pinning all his hopes on a new two-tier Europe giving him something he can pretend is a great victory for him.

As part of the performance, Hammond has reportedly made clear to his counterparts across Europe that British voters will leave if there are not “robust” guarantees that any reform package is “irreversible”. This is the con trick writ large. Interestingly, Dominiczak has not quite let Hammond get away with it, pointing out in its next paragraph:


Jean-Claude Piris, the EU's former top lawyer, said that Mr Hammond’s demands for a legally-watertight package of reforms are impossible because they could simply be reversed by future governments.

That's the polite version. What Piris actually said was more far reaching. When asked if there was a name for a political commitment to change the treaty at some point in the future, he said:


Yes, it’s called bullshit. There is no possibility to make a promise that would be legally binding to change the treaty later.

What Piris is saying is not that future governments could reverse the reforms, but that the EU cannot be bound by a mere 'promise' to make any agreed changes to the treaty. This is Cameron's big concern. He needs the two-tier treaty outline in place to declare he has achieved something through his renegotiation. As Piris makes clear, Cameron can't go into a referendum with legally meaningless pledges.

Going back to Hammond's recent pronouncements, he keeps playing up one element in particular... the issue of ever closer union. He is clearly preparing the ground for what constitutes a successful renegotiation. Cameron clearly wants to come back and declare he has secured a promise to exclude the UK from ever closer union. That is what the notional EU associate membership is designed to deliver. Cameron would be claiming to demand something the EU has already largely developed to enable the Eurozone countries to push on with fiscal integration.

David Cameron's renegotiation is a sham and Hammond is trying to keep people looking in another direction in case it becomes obvious that the EU, not Cameron, is dictating events.
Posted by Unknown at 10:38 pm