It's frustrating that before Brexiteers can get at the real opponent in our fight to leave the EU, David Cameron, we have to tackle people who only want a vote to leave in order to secure a reform deal that keeps Britain in the EU.

Now the Financial Times has joined the Telegraph and Sunday Times in sharing with its readers the reality of Matthew Elliott and Dominic Cummings' devious plan to achieve the long standing reform aims of the Business for Britain campaign. 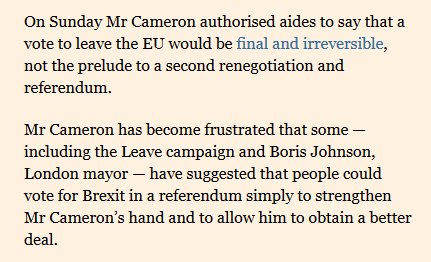 Make no mistake, this is not infighting. Infighting takes place between people on the same side. The Vote Leave campaign is not on the side of people who genuinely and permanently want to leave the EU.

For Vote Leave, the referendum is a means of Tory supporters strengthening the renegotiation hand of a Prime Minister who is completely committed to remaining in the EU. They only want a vote to leave so that Cameron has a better chance of negotiating a reform package to their liking.  Why the likes of Owen Paterson (Con), Kate Hoey (Lab) and Douglas Carswell (Ukip) appear unable to see and understand they are giving aid to people who want to remain in the EU, eludes me. Perhaps they share that reform objective?

People who support 'Vote Leave, Take Control' are, unwittingly or otherwise, backing a campaign that has no intention of Britain exiting the EU for good.
Posted by Unknown at 1:01 pm