Vote Leave: The obfuscation to play down their objective continues

The piece noted above shows the Twitter exchanges with Vote Leave co-owner and campaign director, Dominic Cummings which culminated with this:

Cummings didn't reply to the question. With that in mind, I began asking the head of media for Vote Leave, Robert Oxley, a yes/no question about whether Vote Leave pledge to fight to leave the EU no matter what 'reforms'/'deals' Cameron presents to the British public. There was no reply to that either, despite a good number of retweets and my posing the question several times.

However, Cummings did decide to reply last night to a separate question concerning Vote Leave's plans regarding the referendum. 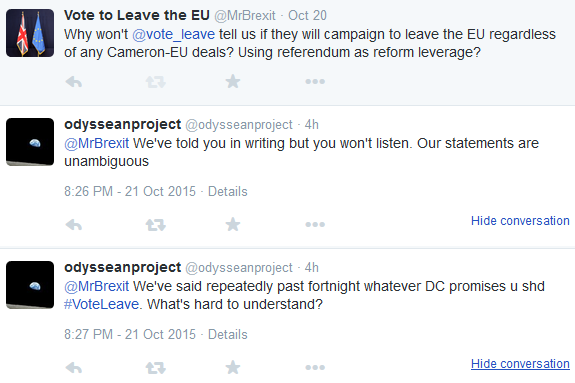 It was a piece of misdirection, because they have not ever said they will campaign to leave the EU, only to vote to leave in the referendum. Vote Leave have said on their website that people should vote to leave the EU, even if Cameron presents a 'deal' offering Britain some form of associate membership of the EU.

But Vote Leave have stayed doggedly silent every time they are asked if they will fight for Brexit no matter what.

Vote Leave only ever go as far as saying we should vote to leave in the referendum, but they never refer to leaving the EU. The evidence suggests they only want people to vote to leave in order to strengthen Cameron's hand in pushing for a reform deal that keeps Britain in the EU. So, as we need to ask very explicit questions to pin Dominic Cummings down on this point, we replied with the following two tweets.

Vote Leave's website deploys a range of soundbites, such as 'need a new relationship', 'new UK-EU deal based on free trade and friendly cooperation', and 'better, friendlier relationship with the EU'. But they do not say Britain should LEAVE the EU, and they don't call for that outcome. So what is Vote Leave's end game?  We don't need to speculate. They state it on their website

This is exactly what Daniel Hannan called for in his recent article on Conservative Home we covered the other day. Having spent years making out he wants Britain to leave the EU, he explained how nothing would make him happier than for David Cameron to come back from Brussels with a deal that he could support, before going on to say that as a result of campaigning to leave, if the polls swing far enough to the 'leave' way, and a David-Owen-type deal follows, Brexit will become unnecessary.

€lliott and Cummings' campaign is significant not for what they say, but for what they don't say. Nowhere do they say anything about leaving the EU, and that is because they want a reform deal that keeps Britain in a 'reformed' EU.

Vote Leave is the ultimate Judas Goat, a campaign seeking the support of people who genuinely want to leave the EU, while having no intention of bringing about that outcome. In its own way it is a form of entryism, trying to control the campaign to leave in order to change its principles and stop Brexit coming to pass.

If €lliott and Cummings win the designation as the official leave campaign, we will either lose the referendum, or win it but see their campaign backing Cameron to secure reforms so Britain will remain in the EU, almost certainly in the two-tier structure €lliott has already declared he wants to see.

The challenge is clear. Before we can defeat Cameron and the pro-EU BSE campaign, we have to defeat €lliott and Cummings' counterfeit operation. If you want Brexit, they are not on your side.
Posted by Unknown at 2:18 am