The real 'Vote Leave' objective they won't openly admit to 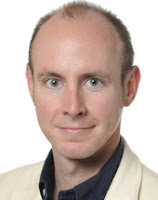 The problem with having a Leave campaign that is owned and run by people who have never publicly called for Britain to leave the EU, but instead have long urged David Cameron to secure a deal to  'reform' of our EU membership, is that you cannot trust their apparent conversion.

Prominent Vote Leave supporter, the Tory MEP and arch Eurosceptic (the now useless noun that describes everyone from those who want to leave the EU immediately, no ifs and no buts, to those who want to hand the EU complete control over every aspect of governance of Britain) Daniel Hannan, has signalled the real objective of the Matthew €lliott/Dominic Cummings campaign with these words in a piece he wrote for ConservativeHome (run by €lliott protege, Mark Wallace):

Ah, some readers will say, Hannan and the Eurosceptics are just trying to raise the bar impossibly high. Actually, we’re not. Our key aims – the supremacy of UK law on our own soil, more freedom to strike bilateral trade deals with non-EU states and the right to determine who can settle on our territory – are remarkably moderate. Nothing would make me happier than for the PM to come back from Brussels with a deal that we could support.

Followed by this closing argument,


As long as Sir Humphrey in Brussels and Jim Hacker in Westminster believe that they can win a referendum with only minor changes, that’s all they’ll ask for. The only way to inspire them to greater radicalism is to start campaigning to leave. If the polls swing far enough our way, and a David-Owen-type deal follows, Brexit will become unnecessary.

Hannan has revealed his dishonesty and his willingness to put Tory interests before all else. He has performed his role as a Judas Goat to a tee. This is a man who has built a large following of people who genuinely want to leave the EU and believed he wanted the same, but kept them on the side of the Tory party machine that has no intention of leaving. Hannan's own words reveal that he is happy for Britain to remain subordinate to the EU provided some crumbs from the table are forthcoming.

Even though I've not tweeted any messages directly to Hannan, tweeting these quotes has resulted in Hannan blocking me on Twitter. The truth is clearly hard to take. But what is also interesting is that my tweet below to Vote Leave's head of media, Robert Oxley, and to Vote Leave's twitter account, has been pointedly ignored for three days, despite it being sent more than once:

People can draw their own conclusions about this silence, but any reasonable person might conclude as I do that that the duplicitous Hannan and the Vote Leave operation are campaigning for a vote to leave at the referendum, not so the Britain exits the EU, but in order to give Cameron leverage to force a deal from the EU that ensures Britain remains docked permanently to Brussels.

Ronseal might do what it says on the tin, but Vote Leave doesn't.

By way of an illustration, Vote Leave's thinking is neatly encapsulated in the third paragraph of this letter to the Telegraph shown below, which was published on Sunday. 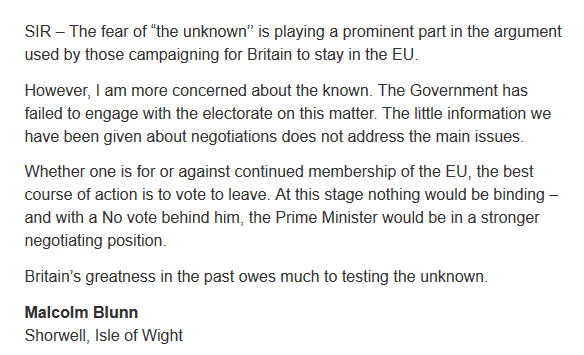 That third paragraph is what Vote Leave wants to achieve. There was no conversion from the Business for Britain push for continued membership with some reforms. As pro-EU people have corrupted the word Eurosceptic, the €lliott/Cummings business venture is corrupting the word Leave.

People who genuinely want to leave the EU no matter what, need to be aware that supporting Vote Leave is to support a plan to keep Britain in the EU. It is just a plot hatched by a small group of Tories, aided by a couple of useful idiots from Labour and Ukip, to strengthen Cameron's hand to secure as yet unspecified reforms. These people are not for Brexit. Their whole campaign is a sham. Don't be taken in by it.
Posted by Unknown at 3:24 am